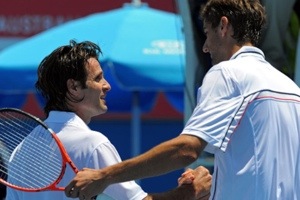 I will never forget the relief I felt the moment I beat Scott Barker in a challenge match, for the last remaining starting position on the Hofstra University, Division I, Men’s Tennis Team. It was a long stressful battle in the wind, but I managed to pull it off. As a result, a starting position for me was locked up for the season. In college tennis, only the top 6 players get starting positions. The previous year I was #7, and I was regulated to play only alternate singles (which did not count), and sometimes doubles (if there was no chance of a team victory). The only other way to play was if there was an injury of one of the top 6. That first season, unfortunately for me, everyone remained healthy.

After winning that challenge match at the start of my second season, there was a different feeling when I put on my team uniform. I suddenly had a sense of legitimacy and confidence which I had never experienced before. These same feelings carried over into the rest of my life as well, and still remain today. Winning that match was a turning point. It meant that I could get a tennis pro position at almost any tennis club, because I was now a Division I, Tennis Player. I was now part of an elite group. That match eventually led to a 17 year career as a Tennis Professional where I held the following positions: High School Varsity Boy’s Head Tennis Coach, Head Tennis Professional, Tennis Camp Director, Director of Tennis, and Club Manager. Many blessings came from winning that match, but the biggest blessing was the legitimacy and confidence I had gained which resulted from that victory.

Matthew 6:25-34
“Therefore I tell you, do not be anxious about your life, what you will eat or what you will drink, nor about your body, what you will put on. Is not life more than food, and the body more than clothing? Look at the birds of the air: they neither sow nor reap nor gather into barns, and yet your heavenly Father feeds them. Are you not of more value than they? And which of you by being anxious can add a single hour to his span of life? And why are you anxious about clothing? Consider the lilies of the field, how they grow: they neither toil nor spin, yet I tell you, even Solomon in all his glory was not arrayed like one of these. But if God so clothes the grass of the field, which today is alive and tomorrow is thrown into the oven, will he not much more clothe you, O you of little faith? Therefore do not be anxious, saying, ‘What shall we eat?’ or ‘What shall we drink?’ or ‘What shall we wear?’ For the Gentiles seek after all these things, and your heavenly Father knows that you need them all. But seek first the kingdom of God and his righteousness, and all these things will be added to you. “Therefore do not be anxious about tomorrow, for tomorrow will be anxious for itself. Sufficient for the day is its own trouble.”

These are the words of Jesus, encouraging His disciples not to worry. Sounds simple, right? But how do we not worry? It’s not like worrying is a switch that we can just turn off when it comes upon us. I certainly could not just turn off my worrying during that challenge match. It remained throughout the match. The relief only came when it ended… in victory.

One of my dearest friends bought me a pew hymnal for Christmas a couple of years ago. My favorite hymn is “Victory in Jesus”, words by Eugene Monroe Bartlett Senior:

I heard an old, old story,
How a Savior came from glory,
How He gave His life on Calvary
To save a wretch like me;
I heard about His groaning,
Then I repented of my sins;
And won the victory.

Refrain:
O victory in Jesus,
My Savior, forever.
He sought me and bought me
With His redeeming blood;
He loved me ere I knew Him,
And all my love is due Him,
He plunged me to victory,
Beneath the cleansing flood
I heard about His healing,
Of His cleansing power revealing.
How He made the lame to walk again
And caused the blind to see;
And then I cried, “Dear Jesus,
Come and heal my broken spirit,”
And somehow Jesus came and brought
To me the victory.

I heard about a mansion
He has built for me in glory.
And I heard about the streets of gold
Beyond the crystal sea;
About the angels singing,
And the old redemption story,
And some sweet day I’ll sing up there
The song of victory.

Here is a reminder from Paul to the Colossians, about who God is and what He has done, in order that they remain “stable and steadfast”:

Colossians 1:9-23
“And so, from the day we heard, we have not ceased to pray for you, asking that you may be filled with the knowledge of His will in all spiritual wisdom and understanding, so as to walk in a manner worthy of the Lord, fully pleasing to Him, bearing fruit in every good work and increasing in the knowledge of God. May you be strengthened with all power, according to His glorious might, for all endurance and patience with joy, giving thanks to the Father, who has qualified you to share in the inheritance of the saints in light. He has delivered us from the domain of darkness and transferred us to the kingdom of his beloved Son, in whom we have redemption, the forgiveness of sins. He is the image of the invisible God, the firstborn of all creation. For by Him all things were created, in heaven and on earth, visible and invisible, whether thrones or dominions or rulers or authorities—all things were created through Him and for Him. And He is before all things, and in Him all things hold together. And He is the head of the body, the church. He is the beginning, the firstborn from the dead, that in everything He might be preeminent. For in Him all the fullness of God was pleased to dwell, and through Him to reconcile to Himself all things, whether on earth or in heaven, making peace by the blood of his cross. And you, who once were alienated and hostile in mind, doing evil deeds, He has now reconciled in His body of flesh by His death, in order to present you holy and blameless and above reproach before Him, if indeed you continue in the faith, stable and steadfast, not shifting from the hope of the gospel that you heard, which has been proclaimed in all creation under heaven, and of which I, Paul, became a minister.”