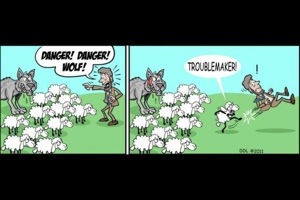 “The road to hell is paved with good intensions.” – Unknown

Scripture encourages the rebuking of false prophets and teachers. Such is extremely important regarding the health of the body of Christ, and it must be done. Take Titus 1:9…

Titus 1:9
“He must hold firm to the trustworthy word as taught, so that he may be able to give instruction in sound doctrine and also to rebuke those who contradict it.”

But who is the “He” who is to do such rebuke?

Titus 1:7-8
“For an OVERSEER, as God’s steward, must be above reproach. He must not be arrogant or quick- tempered or a drunkard or violent or greedy for gain, but hospitable, a lover of good, self- controlled, upright, holy, and disciplined.”

Such rebuke is the role of an elder (overseer), but not the general or regular Christian. The general Christian who calls out a false teacher or “cries wolf” has a great intension, but it may actually just exacerbate the situation, instead of helping to resolve it. The cartoon above does a great job of illustrating this point.

I remember watching on live TV back in 1993, the siege by the U.S. federal agency Bureau of Alcohol, Tobacco and Firearms (ATF) on the Branch Dividian compound in Waco, Texas. It was an abusive Christian sect/cult lead by a man named David Koresh. The resistance of the ATF by the members of the cult was intense. The standoff lasted 51 days, and 76 men, women, and children, including David Koresh, died.

My point in referencing this tragic event is to illustrate that when a false prophet/teacher or “wolf” is called out, or like in the extreme case of Waco, the sheep usually seem to always defend their wolf. In other words, a well intentioned correction or rebuke of a church leader, by a general Christian as opposed to an elder Christian, usually just leads to a further hardening of the wolf led congregants’ hearts; thus, further paving the road to hell for them and their leader, rather than to heaven. Basically, non-elder Christians who cry “wolf” usually just do more harm than good.

Below are two scriptural warnings which are given to the brethren regarding wolves. One is from Christ, and the second is from Paul. There is an interesting similarity between the two warnings. See if you can catch it:

Matthew 7:15
“Beware of false prophets, who come to you in sheep’s clothing but inwardly are ravenous wolves.”

Acts 20:29
“I know that after my departure fierce wolves will come in among you, not sparing the flock.”

Did you catch it?

Notice that both warnings mention the wolf coming to the flock, and not the flock coming the wolf. This is a subtle, but important point. The warnings indicate that what is needed is a proactive monitoring (within the congregation) by its elders, from being approached by a wolf; rather than the proactive searching out and hunting of wolves by individual congregants (outside of the congregation).

May we (Christians) always keep in prayer the flocks led by wolves, and may we always be ready to be an oasis for the sheep who escape.