James 2:8 (HCSB)
Indeed, if you keep the royal law prescribed in the Scripture, Love your neighbor as yourself, you are doing well.

According to “Blue Letter Bible,” the “royal law” (in its most literal form) means… the “law of our king.” Here is a picture from my phone when you click on the (fn) for the term in the app… 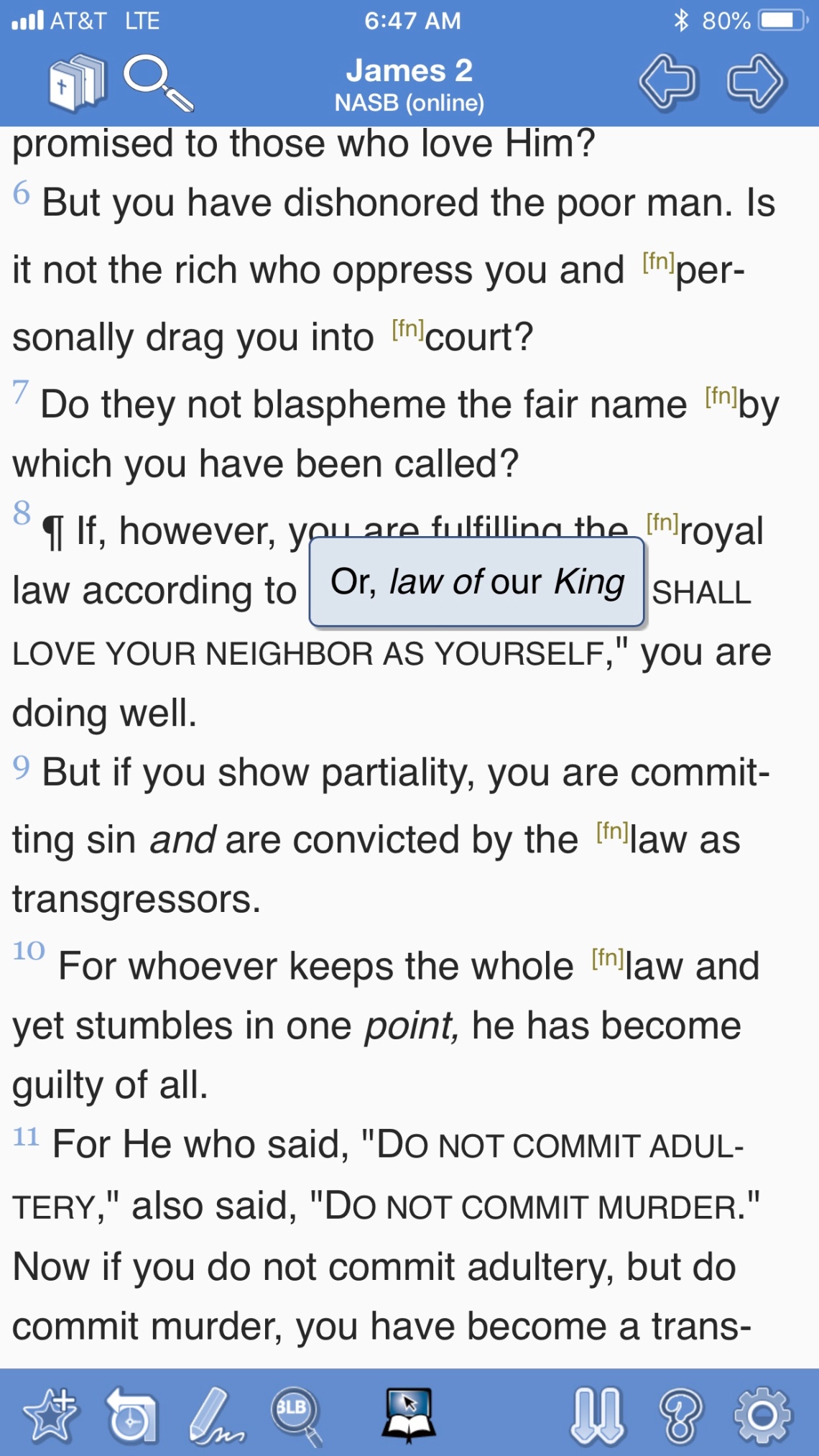 If we replace “royal law” with “law of our king,” the verse then reads as follows…

Indeed, if you keep the law of our king prescribed in the Scripture, Love your neighbor as yourself, you are doing well.

(On a side note… Did you notice it says that this law is “prescribed,” and not “described”? Just something to consider as you read this.)

Another way to think of the “law of our king” or the “royal law” is to call it a “royal edict.” “Edict” is another word for law. One website defines a “royal edict” this way…

“Royal Edicts are missives published directly by the monarch that, once ratified by the incumbent royal, automatically becomes federal law.”

Now, in light of this, we must keep in mind that Jesus Christ is described as the “King of kings and the Lord of lords” in scripture…

1 Timothy 6:15b-16 (HCSB)
He is the blessed and only Sovereign,
the King of kings,
and the Lord of lords,
the only One who has immortality,
dwelling in unapproachable light;
no one has seen or can see Him,
to Him be honor and eternal might.
Amen.

This means that Jesus Christ is the “incumbent royal.” He is the “only Sovereign.” He is the One from whom the “royal law” originates. Therefore, what He commands becomes the “federal law.” Federal law is a more formal way of describing the law that is central to the ruling or governing entity. In this case, that entity is Christ Himself… and He has issued a royal edict which we must adhere to, no?

So, what exactly is this “royal law”?

Premise #1
James 2:8 (HCSB) – “Indeed, if you keep the royal law prescribed in the Scripture, Love your neighbor as yourself, you are doing well.”

Premise #2
Galatians 5:14 (HCSB) – “For the entire law is fulfilled in one statement: Love your neighbor as yourself.”

Acts 17:1-9 (HCSB)
Then they traveled through Amphipolis and Apollonia and came to Thessalonica, where there was a Jewish synagogue. As usual, Paul went to the synagogue, and on three Sabbath days reasoned with them from the Scriptures, explaining and showing that the Messiah had to suffer and rise from the dead: “This Jesus I am proclaiming to you is the Messiah.” Then some of them were persuaded and joined Paul and Silas, including a great number of God-fearing Greeks, as well as a number of the leading women.

But the Jews became jealous, and they brought together some scoundrels from the marketplace, formed a mob, and started a riot in the city. Attacking Jason’s house, they searched for them to bring them out to the public assembly. When they did not find them, they dragged Jason and some of the brothers before the city officials, shouting, “These men who have turned the world upside down have come here too, and Jason has received them as guests! They are all acting contrary to Caesar’s decrees, saying that there is another king — Jesus!” The Jews stirred up the crowd and the city officials who heard these things. So taking a security bond from Jason and the others, they released them.

The Christian’s king is Jesus, and His royal edict, His official command, His “royal law” (given to His subjects), is… to love. In other words, if we (Christians) uphold our King’s decree, then we are “doing well,” because the law of our King, The Law of The Christ (if you will), is then upheld.