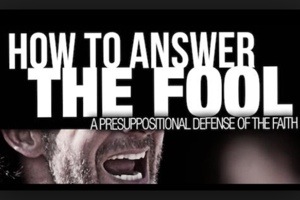 Genesis 1:1
“In the beginning, God created the heavens and the earth.”

Romans 1:19-20
“For what can be known about God is plain to them, because God has shown it to them. For his invisible attributes, namely, his eternal power and divine nature, have been clearly perceived, ever since the creation of the world, in the things that have been made. So they are without excuse.”

And why is man without excuse?

Because man knows God by default:

Romans 1:21-22
“For although they knew God, they did not honor him as God or give thanks to him, but they became futile in their thinking, and their foolish hearts were darkened. Claiming to be wise, they became fools”

We (Christians) must always keep this fact in mind when we evangelize. It is wrong for us to ever assume that the unbeliever does not know that God exists. They may not know who Jesus Christ is, and what He did, but everyone knows that God exists, and also that they have violated His purpose; that they have sinned against Him. It is our job to expose such, and then to share the solution: the Gospel.

Sye: Ok, so you believe in proof?

Sye: So, what is truth in your worldview?

Sye: Would you agree that truth is factual, truth is whatever is real?

Sye: So, you have a correspondence theory of truth. Truth is that which corresponds to reality, correct?

Sye: How do you know what’s real?

College student: I know what is real by what is tested and what is accepted, over and over again; throughout time; and through scientific measures; and scientific theory.

Sye: Now, in order to come to those truth claims, you are employing your reasoning, correct?

College student: To an extent. But, I’m also employing the reasonings of thousands of other men who have existed.

Sye: Right, but in order to interpret what those thousands of other people say, you are employing your reasoning.

Sye: Ok, so truth, you know through your reasoning.

College student: Along with…

Sye: Ok, but you have to reason about what other people say.

Sye: My question is, how do you know that your reasoning is valid?

Sye: That’s right. So if you don’t know that your reasoning is valid, would it not follow that you cannot know anything to be true?

Sye: But, that’s the problem.

College student: But, isn’t it the same for you? Do you not know anything to be true?

Sye: No, what I’m saying is that you do know things to be true.

College student: (Another head nod, in an almost conceding manner.)

Sye: To deny truth is a logical fallacy.

College student: We know truth in our own realm, like you said, “what is real?”

Sye: Well then, this is the question sir. Can you be wrong about everything you know?

Sye: Ok, well, here’s the problem then. When you say that you can be wrong about everything you claim to know, you’ve given up knowledge. Now, let me explain that to you. Let’s say I ask you how tall this building is. And you said, “It’s fifty feet tall, but I could be wrong.” Do you know it?

Sye: Not, if you can be wrong.

Sye: So, if you can be wrong about everything you know, it follows that you know nothing.

Sye: But, you do know things.

College student: No, I don’t think so. The only thing that I do know, is that I know nothing.

Sye: Do you know that?

Sye: That’s right, you could be dreaming.

Sye: What I’m saying to you is that unless you start with God, you cannot know anything. But, you do know things. You’re paying big money to go to a university to study things… A cop pulls you over. You roll down the window say, “I don’t know if you exist, or else I’m not going to pay the fine,” or whatever. You don’t live like that. What I’m going to say is that unless you start with God, you can’t know anything. Because, in order to know anything at all, you would have to know everything. Because, if you don’t know everything, what you don’t know can contradict what you think you know. Does that make sense to you?

College student: It does. But, can’t the argument be posed in the same way that you talk about God?

Sye: Well, we’ll get to that, and you’re reasoning very well, sir… So, in order to know anything at all, you would need to know everything, right? Or, have a revelation from someone who does. That’s the Christian worldview. God has revealed truth to us in His Word, such that we can know for certain. Because, you know things for certain. Do you know why you know things for certain? Because, you know that God exists, and that’s what the Bible says. People don’t go to hell for denying what they don’t know. They go to hell for the sin against the God they do know. And I expose that people know God, when they make knowledge claims for which they cannot account for without Him.

Sye: See, that’s the problem. Jesus Christ did not only die to save souls for eternity, He also died to save reasoning now. Because if you say that you can be wrong about everything you claim to know, I say, “Can you be wrong about that?” It’s absurdity, and you have the option: God or absurdity. But, people choose absurdity because they love their sin.

I encourage you to never forget that the unbeliever may not acknowledge their sin against God, or even His existence, but deep down inside, they do know that He is there and that they have sinned against Him. Scripture confirms it. But, after exposing such, lovingly, we must tell them who Christ is, what He has done, and then urge them to acknowledge their sin against Him (repent), and trust in Him for salvation.