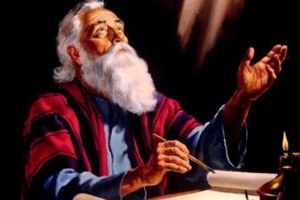 1 Peter 1:10-12
“Concerning this salvation, the prophets who prophesied about the grace that was to be yours searched and inquired carefully, inquiring what person or time the Spirit of Christ in them was indicating when he predicted the sufferings of Christ and the subsequent glories. It was revealed to them that they were serving not themselves but you, in the things that have now been announced to you through those who preached the good news to you by the Holy Spirit sent from heaven, things into which angels long to look.”

“It was revealed to them that they were serving not themselves but you,”

I think that it is a very important fact to keep in mind when reading scripture, that the writers absolutely knew the purpose of what they were writing (serving us, the brethren), because it was revealed to them by God exactly what the purpose of the writing was for. It wasn’t like they wrote cryptic, purposeless rhetoric without understanding why they were inspired to labor in such a way. The writers were, first and foremost, deeply concerned with “what person or time the Spirit of Christ in them was indicating when he predicted the sufferings of Christ and the subsequent glories.” (In other words, they were continually looking for and anticipating the coming Messiah, and the blessings which come with His arrival.) But at the same time, they were also concerned for the current and future brethren. Peter teaches that the purpose for their desire to write was us, Christians, and this purpose was revealed to them.

Not only does God care about us, but so did the writers of scripture, through whom God revealed Himself to us. Our brothers, who penned God’s revelation, not only understood the relevance of what they wrote, but they also cared about us more than we may realize. Their motivation was intensely personal:

1 Corinthians 4:14
“I do not write these things to make you ashamed, but to admonish you as my beloved children.”

Luke 1:1-3
“Inasmuch as many have undertaken to compile a narrative of the things that have been accomplished among us, just as those who from the beginning were eyewitnesses and ministers of the word have delivered them to us, it seemed good to me also, having followed all things closely for some time past, to write an orderly account for you, most excellent Theophilus, that you may have certainty concerning the things you have been taught.”

Ecclesiastes 12:12
“My son, beware of anything beyond these. Of making many books there is no end, and much study is a weariness of the flesh.”

Deuteronomy 4:5-6
“See, I have taught you statutes and rules, as the Lord my God commanded me, that you should do them in the land that you are entering to take possession of it. Keep them and do them, for that will be your wisdom and your understanding in the sight of the peoples, who, when they hear all these statutes, will say, ‘Surely this great nation is a wise and understanding people. ’”

1 John 5:13
“I write these things to you who believe in the name of the Son of God that you may know that you have eternal life.”

John 20:31
“but these are written so that you may believe that Jesus is the Christ, the Son of God, and that by believing you may have life in his name.”

1 John 2:1
“My little children, I am writing these things to you so that you may not sin. But if anyone does sin, we have an advocate with the Father, Jesus Christ the righteous.”

1 Corinthians 16:20-21
“All the brothers send you greetings. Greet one another with a holy kiss.
I, Paul, write this greeting with my own hand.”

Colossians 4:18
“I, Paul, write this greeting with my own hand. Remember my chains. Grace be with you.”

I leave you with the opening from the book of Hebrews. It describes how God’s revelation became progressively more personal, from the time that God spoke through His prophets about His Son’s coming, to the time that He actually came in the flesh. The author is unknown:

Hebrews 1:1
“Long ago, at many times and in many ways, God spoke to our fathers by the prophets, but in these last days he has spoken to us by his Son, whom he appointed the heir of all things, through whom also he created the world.”